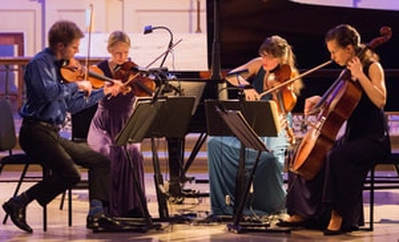 The Gildas Quartet invite you to attend at 7:00 before the concert for an illustrated talk about the music they will be playing.  Do come early to enjoy this if you can.
The Gildas Quartet has performed to critical acclaim across the UK and Europe at major venues including the Purcell Room, Bridgewater Hall, Wigmore Hall, and live on BBC Radio 3. Praised for their 'refreshing approach' and 'exciting precision', they are fast establishing themselves as one of the most exciting young ensembles to emerge in recent years.

Passionate exponents of a diverse and varied repertoire, the Gildas have had the privilege of working with composers including Sir Harrison Birtwistle, Colin Matthews and Howard Skempton, performing their works at London’s Southbank Centre and The Forge. They have recently given recitals at international festivals such as the Two Moors Festival, Oxford Lieder Festival, and the Cheltenham Festival, and they were invited to teach and perform at Dartington Summer Music in August 2017.